The LGBTQ community is at greater risk for contracting COVID-19, largely due to discriminatory environmental factors. The Centers for Disease Control and Prevention (CDC) has been calling for more data collection about the impact of COVID-19 on the LGBTQ+ community since it released a report in 2021. WHEN?.

The report shows underlying health conditions that increase the risk of contracting COVID-19 are more common among the LGBTQ community. Some of the risk factors include:

John Oeffinger at the Texas Health Institute (THI) is looking into what health risk factors are prevalent in the LGBTQ community that may contribute to greater risks for worse health outcomes related to COVID-19. The Patient-Centered Outcomes Research Institute (PCORI) awarded TransFORWARD: Texas Transgender Health, a 5-year collaboration between Texas Health Institute and Equality Texas Foundation, an engagement project to understand the long-term effects of COVID-19 on the transgender and gender diverse community. Part of this work includes using data from the Population Research in Identity and Disparities for Equality or PRIDE Study the first large-scale, long-term national health study of people who identify as LGBTQ, or another sexual or gender minority.

The PRIDE Study data will provide vital insights into the health and well-being of this under-researched community. The PRIDE study hopes to improve the health of LGBTQ people. The main question the study is examining is how does being LGBTQ impact physical, mental, or social health. Oeffinger said the data gathered in the PRIDE Study is instrumental in improving the public health of the LGBTQ community.

“We’re looking at a retrospective look of PRIDE Study folks from the annual surveys from several years and comparing trans to cis as well as LGBTQ to the general population on a whole range of factors.”

Oeffinger said THI is focused on building health equity and reducing disparities in everything they do and making systemic changes. This shift includes having a better understanding of the trans community through training and awareness. That’s why THI developed a five-course learning series about the trans community.

According to Oeffinger, one of the most important and yet difficult concepts to grasp about the LGBTQ community is the intersectionality of sexual orientation, gender identities, and social determinants of health. 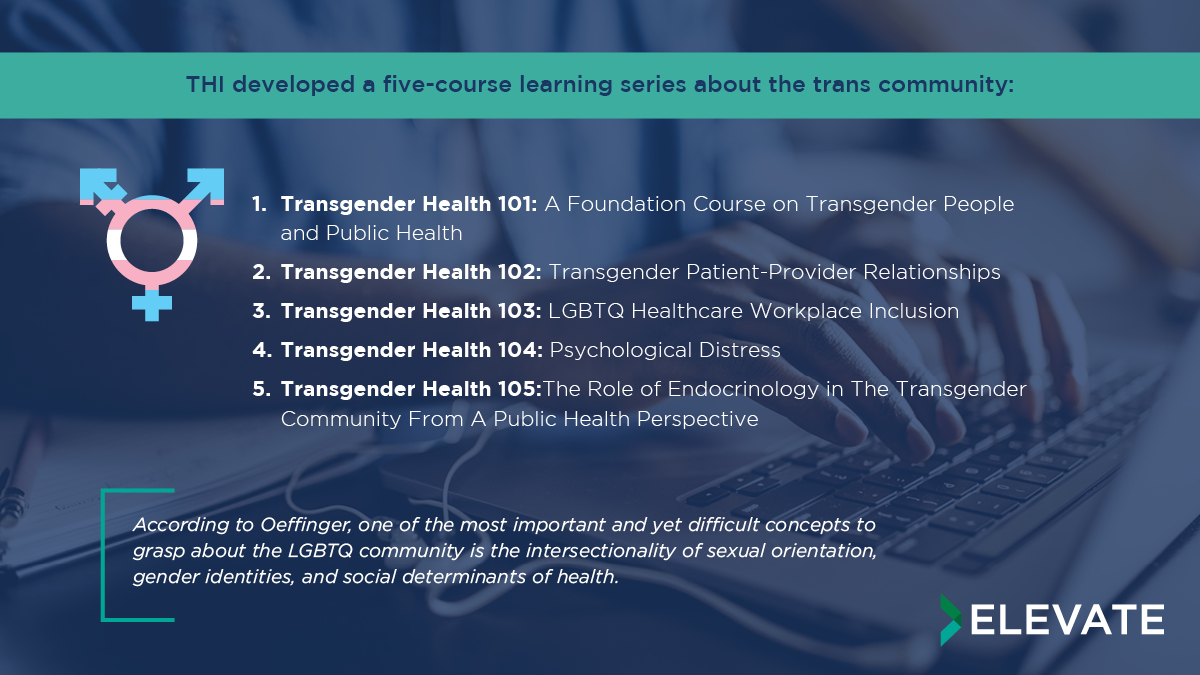 “If we take what we’re already doing in areas like health equity and health disparities and social determinants of health and layer intersectionality of the LGBTQ community in as an intentional piece so that it’s not left behind, we’ll start to make real progress,” Oeffinger said. “Disabled people tend to get left behind, and trans people who are disabled or neurodivergent face unique challenges that can get lost due to their complexity.”

Social determinants of health can include housing and job security, two things many people have struggled with during the pandemic. According to the CDC’s report,  17% of LGBTQ adults do not have any kind of health insurance coverage. Research shows people in the LGBTQ community have been disproportionately impacted by COVID-19 because they are more likely to have experienced a cut in work hours with one in five becoming unemployed during the pandemic.

A report from the Human Rights Campaign Foundation shows there are at least five million people in the LGBTQ community who work in jobs that are more likely to be impacted by COVID-19. That includes service industry occupations, which carry a greater risk of exposure to the virus and a greater risk for economic instability. To get a better picture of this, nearly one in ten LGBTQ people are unemployed. The Center for American Progress has some data on why that might be.

Economic discrimination such as this contributes to a higher risk of poverty, making access to healthcare an even bigger hurdle. Public health training centers and workers can improve these outcomes by educating themselves and creating safe environments for LGBTQ members.

What can public health professionals do to improve care for the LGBTQ community?

Improving healthcare for the LGBTQ community starts with awareness and understanding. THI used an award from Patient-Centered Outcomes Research Institute to launch TransFORWARD, a statewide transgender-powered research collaborative in Texas that has been awarded two engagement projects. The collaborative works to establish trust in the transgender community. Its goal is to connect transgender people with clinicians and researchers, ensuring medical care for transgender people is informed by evidence-based data. Oeffinger said this is essential for improving long-term care for trans and gender-diverse communities. 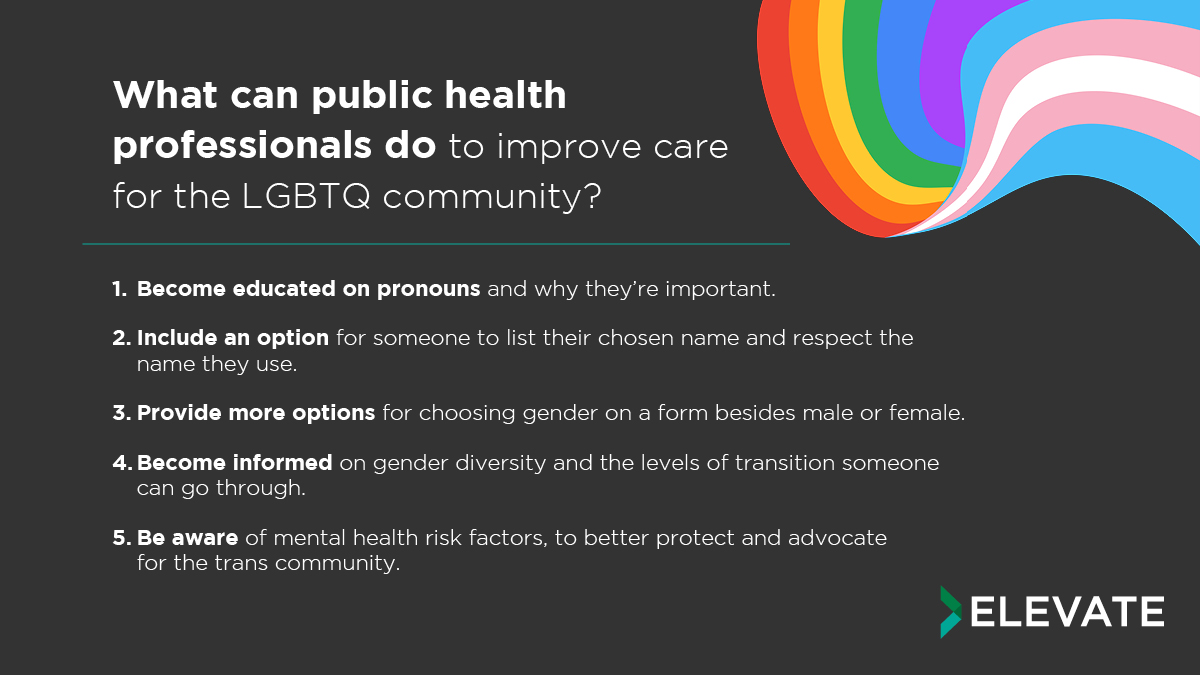 TransFORWARD reports sexual and gender minorities fare worse in the healthcare system and have poorer health outcomes than the general population. Transgender people experience inequities that stem from discrimination, stigma, harassment, poverty, and lack of transgender-specific health information. Oeffinger said some of their reasons are being afraid to be “outed” when they are not ready, having to prove their gender identity even when it does not yet match their expression, being dead-named, which means they are referred to using their birth name.

There are many stages to transitioning. Not every trans or gender-diverse person is going to choose any particular route, but each person deserves to be valued for their individuality.

Oeffinger wants to see the public health community learn to value a person’s lived experience more and not get so lost in categorizing them as one thing or another. “We’re really good about saying everyone is unique, but let’s talk about the value of that uniqueness and what people bring to the table from that lived experience,” Oeffinger said. “These are lessons we can use for everyone, not just LGBTQ individuals.”