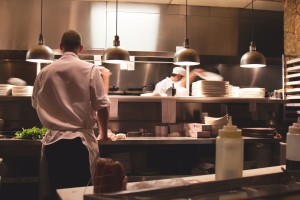 Consuming too much sodium can raise blood pressure levels, contribute to hypertension and inevitably increase risk of heart disease and stroke—the two leading causes of death in the world. Excessive sodium intake is also associated with osteoporosis, stomach cancer, and kidney disease.

So, why are we consuming so much sodium? Well, it’s often hidden in our favorite foods.

Approximately 75 percent of total sodium intake comes from the processed and commercially prepared foods we buy at the grocery store and in restaurants. Since the average person has little control over the sodium content in these foods, it is often difficult to reduce sodium intake.

Health and wellness are quickly emerging as serious issues in the future of foodservice. According to the Futures Company, the average person in the U.S. now places more emphasis on healthy food decisions than ever before; 73 percent say they are more interested in healthy eating practices than they were a few years ago.

It’s time to connect public health and the food industry 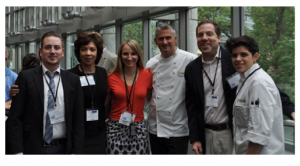 NNPHI is partnering with Health Resources in Action and The Culinary Institute of America to connect public health and the food industry.

The recent alignment of interests between public health, the food industry, and consumer demand creates an unprecedented opportunity for cross-sector collaboration to reduce sodium in foods prepared, sold and serve in food service settings.

Since January 2015, NNPHI has collaborated with the Centers for Disease Control and Prevention (CDC), Dialogue4Health, The Culinary Institute of America and other strategic partners, to host a national web forum series featuring food industry representatives and public health practitioners who are making a difference to reduce sodium across the country.

See highlights from the series, below:

Getting Started with Food Service Providers (February 18, 2015)
How does change happen in commercial and non-commercial food service settings? Learn how to make change without compromising flavor.

Tactical Steps to Sodium Reduction (March 10, 2015)
How can changing from processed to fresh foods reduce sodium on menus? Learn more about this transition and how to successfully lower sodium items without compromising customer satisfaction or profitability.

Culinary Techniques for Reducing Sodium (May 19, 2015)
Global flavor profiles can be used to improve taste without increasing sodium. Also, learn how one city’s Chinese takeout restaurants are using culinary techniques to reduce sodium.

Reducing Sodium through Food Manufacturing (October 27, 2015)
What is the food industry doing to lower sodium? The National Dairy Council shares efforts by cheese makers to lead on process control and product innovations. Also, a unique partnership between a public health department and a local restaurant leads to lower sodium in pizza.

Reducing Sodium through Public-Private Collaboration (March 10, 2016)
How can public health collaborate with industry leaders to inform foods produced, prepared, and served within the food system? Learn this and more by hearing from a representative of the food manufacturer Unilever.

Next: sodium reduction toolkits and collaborating with The Culinary Institute of America

NNPHI is collaborating with Health Resources in Action on a comprehensive toolkit of sodium reduction resources, case studies and best practices. We’re also collaborating with The Culinary Institute of America to produce a series of short training videos for food service providers and kitchen staff highlighting cooking skills and techniques to boost flavor while reducing sodium.

As we build on the success of this Web Forum series, please keep in touch for more resources from NNPHI.