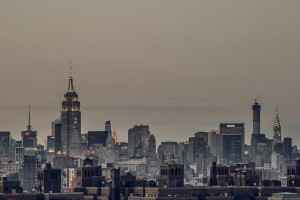 An intense summer heat wave is gripping New York City in a contentious election year. The heat affects everyone, but certain populations are most vulnerable, including people who work outdoors, older adults, and recent immigrants and refugees. Officials scramble to keep residents cool, but by the end of the heat wave 1,500 people are dead. Ice—the primary means of mitigating heat exposure—is in short supply. It’s 1896.

Heat-related mortality and morbidity in New York City improved vastly throughout the twentieth century and beyond, thanks to progress in public health, technology, and other areas, although heat is still the most deadly form of extreme weather. But another threat—with implications reaching far beyond the city­­—could stall or even reverse 120 years of progress: climate change.

By 2080, in New York City alone, 3,331 residents could die every summer from exposure to excessive heat if public health systems haven’t adapted according to a new study in the journal Environmental Health Perspectives. But mortality and morbidity risks rise even with modest increases in temperature, a concern across New York State. To build resiliency, a prepared public health workforce is essential.

New York City makes up less than half the state’s population. Statewide and regional public health systems and their partners are working hard to identify and prepare for climate change’s most concerning health effects. Regional public health training centers are instrumental in leading the way by providing training, collaborating, and sharing urgent information.

New York State is a place of geographic, demographic, and health status diversity. Such variety carries nuanced and specific implications for public health resilience to climate change. The state experiences severe weather events such as hurricanes, droughts, floods, and extreme temperatures at both ends of the thermometer. More than 90 percent of the population is urban––New York City is the nation’s densest city—but over half the state’s land mass is forested, and its 36,300 farms produce billions of dollars of food for the region.

The successful result was a cooperatively developed Public Health and Climate Change Webinar Series. Indicating that climate change is of interest far beyond these regions, a total of 244 participants from over 20 states attended the series, which aired in March and April 2016. The series included three webinars:

Both training centers had relevant expertise to share. To better strengthen the public health workforce and adapt to changing needs, each of the ten Health Resources and Services Administration (HRSA)-supported training centers in the Public Health Learning Network has developed expertise in a specific content area. Training centers share that knowledge and expertise through collaboration. The webinar series was one such opportunity.

Environmental public health is the Region V Great Lakes Public Health Training Collaborative’s expertise area, so New York turned to these partners for help preparing the workforce to address the public health implications of climate change. The New York center’s own expertise area—health disparities, health equity, and social determinants of health—was also highly relevant. Because climate change impacts vulnerable populations—many of whom are at higher risk for other health conditions—it is an issue that crosses the intersections of environmental health, health equity, and social justice.

Melissa Bernstein, Center Coordinator at the New York–based center, had been thinking about the links between health equity and climate change for some time. After a training the center offered on energy insecurity—what people experience when they can’t afford to pay for essential utilities—she thought about how that issue was deeply intertwined with poverty, housing sufficiency, temperature regulation, and air quality. “It’s an example of how vulnerable populations that are most affected by health disparities are essentially the ones who could be most affected by climate change,” she explained. “The connection there is undeniable, and it’s something we’re going to see more and more as time goes on.”

The Great Lakes region and New York State also have some similar geographic and demographic features and resulting predicted public health risks from climate change. Like New York State, the Great Lakes region faces temperature extremes, contains both rural and densely urban areas, and has areas prone to coastal flooding. Chicago has also experienced extreme heat waves, including one in 1995 that resulted in hundreds of deaths. A 2014 report predicts climate change will increase the region’s risks of heat wave and storms, reduce air and water quality, and affect vector-borne diseases, such as those borne by ticks and mosquitoes. The effects, again, will hit vulnerable populations disproportionally.

With urgent public health issues that are both universally relevant and locally specific, public health educators know local, regional, national, and global collaboration is integral to quickly developing and sharing high-quality information that can be adapted to local needs. For this webinar series planning process, the collaborating training centers also brought in experts from the federally funded Building Resilience Against Climate Effects (BRACE) programs as well as state health department representatives from New York and Illinois. Because it’s challenging to measure whether a large-scale climate change health intervention is effective, organizers invited Dr. Parthasarathi (Partho) Ganguly, MBBS, MD, MPhil, from the Indian Institute of Public Health in Gandhinagar to present on a unique model he had developed and evaluated for improving the resilience of a city in the face of extreme heat.

“We made sure all key players were included in the conversation so we can plan a session that included each perspective,” said Sophie Naji, Program Manager at the Illinois-based center.

Bernstein added, “Collaborating with another Regional Public Health Training Center to produce these webinars made for an enhanced series that was informed by diverse climate change concerns from around the nation.”

The resulting content can be adapted for other regions, and was developed more effectively and efficiently than either region could have produced alone. It’s a model for public health workforce development that may become increasingly valuable.

As climate change escalates, the urgency of public health workforce training will also expand. Most of climate change’s potential effects—including disasters, weather events, food shortages, water quality, and disease outbreaks—will cross regions, states, and nations because of migration and other factors. By collaborating and supporting one another’s work, public health training centers and their regions can address these increasingly interconnected challenges.

Archived recordings of the webinars will be available soon. For more information about these recordings or other questions about the collaboration, please contact Melissa Bernstein in Region II or Sophie Naji in Region V.