A common agenda, a conversation, and a need to dispel misperceptions about reopening led to a collaborative effort between two statewide agencies who had worked together before—but never during a pandemic. The Louisiana Public Health Institute (LPHI) and the Louisiana Department of Health (LDH) launched COVID-19: Preparing for the Next Phase, nine virtual, place-based townhall meetings, to educate residents about response measures, reopening approaches and available resources.

Supported with funds from the Greater New Orleans Foundation, these dialogues created space for residents to talk about issues of equity, ownership, self-sufficiency and agency, particularly for communities of color in Louisiana. The stay-at-home orders and other COVID-19 restrictions put in place to create safety had left people feeling disconnected. Limited or conflicting messages had created confusion.

LPHI’s and LDH’s deep community connections allowed them to engage panelists, local elected officials, faith-based leaders, advocates, and local health department staff to present tailored information that reached nearly 1,000 Louisianans. The facts on the ground changed dramatically between the conceptualization and implementation of these townhall meetings. While the nation as a whole faced a pandemic, emerging statistics showed significant inequity both nationally and locally Louisiana, particularly for African Americans.

In mid-May, when the tele-town halls occurred, African Americans represented 70 percent of the state’s COVID-19 related deaths despite representing less than one-third of Louisiana’s total population. A study published in April 2020 showed 52 percent of COVID-19 cases—and 58% of deaths—occurred in disproportionately Black counties/parishes even though Black Americans account for less than 13 percent of the U.S. population. This held true for counties with above-average wealth and health care coverage.

The COVID Racial Data Tracker reinforces this early study showing that Black Americans are dying at a rate 2.5 times higher than their white counterparts (67 per 100,000 for Black Americans compared to 26 per 100,000 for White Americans). As of July 13, this translated to 27,574 Black lives nationally or 23 percent of the deaths where race is known. COVID-19 has claimed 1,671 Black lives in Louisiana, representing 52 percent of the state’s deaths.

These inequities, which were stitched into our nation’s fabric during slavery, codified by early constitutional laws that considered Black Americans 3/5 of a person, and integrated into the nation’s interrelated systems designed to support population health, became much of the focus during the Lake Charles tele-town hall.

Dr. Samuel C. Tolbert, Jr., pastor of the Greater Saint Mary Missionary Baptist Church Pastor in Lake Charles, La., emphasized that poor health now can be traced back 400 years to slavery, a fact that other panelists describe as having a large impact on the black community nationally even before COVID-19. “A lot of it has to do with history that our ancestors have suffered and now we are still suffering,” Tolbert said.

“We are interested in good health for everybody, but we are especially interested in being  healthy,” explained JayVon Muhammad, SWLA Center for Health Services’ Chief Executive Officer as she highlighted the higher rates of chronic diseases for African Americans in Louisiana. “That is something we have not been able to achieve for centuries,” Muhammad continued. “When we look at disparities, it’s one thing to say we have a high number of people with hypertension, but we have to look at  the mind first because a lot of the physical manifestation of illness comes from the mind, and a lot of that comes from our experience that we’re walking trying to have equity.”

AmfAR, The Foundation for AIDS Research, developed a dashboard that tracks data revealing vastly different outcomes for predominantly Black communities, nothing that these disparate outcomes do not reflect on “intrinsic characteristics of black community or individual risk factors.” Instead, these issues are connected to structural factors, including pervasive discrimination, health care access, household density, persistent economic inequities are the cause.

Tolbert, a former Lake Charles Commissioner and Louisiana Economic Development Cooperation Board member, dismissed the idea of “trying to get along with people … when my people are dying and suffering.”

“It’s very important as a faith leader that we try to educate the constituency that is in the pew on Sunday that we cannot be silent of the issues around us,” Tolbert said.

Braylon Harris, Mt. Olive’s Baptist Church Pastor and the Impact Agency Director echoed Tolbert’s frustration. “There are points of advocacy that we must be involved in and use our voice to move our community, move our society from a place of apathy to a place of empathy from a place of carelessness to carefulness,” Harris said.

Dr. Earl Benjamin-Robinson, Deputy Director for the Community Partnerships and Health Equity and a town hall organizer, discussed how the intersectionality between race, age and living in the south contributes to these higher COVID-19 rates. “Looking at these nuances gives us ideas and helps us lay the groundwork to make changes,” Benjamin-Robinson said. “When we start to look at those nuances laid upon other nuances, we see an increased disparity that happens as a result of COVID. That gives us ideas and lays groundwork that can keep that from happening.”

According to several panelists, agencies need to ensure those most impacted are at the table to meaningfully contribute to solutions. As part of this effort, the SWLA Center for Health Services started a COVID implementation team, which creates opportunities for the affected populations to have a seat at the table. “People think that poor people and poor clinics are takers, but in truth we have a lot to offer,” said Muhammad, who administers this federally qualified health clinic (FQHC). “A true fact is that when Black people get justice, we give it. We do not use it against people, but we give everybody justice.”

To illustrate this, Muhmmad’s clinic has pushed their health focus beyond the boundaries of a traditional healthcare provider. They run a fitness center, sponsor community events such as a Juneteenth celebration, and offer banking options in an area where most financial institutions have closed their doors.

Dr. Lacey Cavanaugh, Louisiana Office of Public Health Region 5 Medical Director agreed.  “When we look at health equity, we know that it is not just related to COVID,” Cavanaugh, a Lutcher, Louisiana native, said. “You must embed a lens of health equity in everything that you do and make it a consideration for every policy and every initiative.”

Leaders from the Lake Charles townhall predicted the outcomes would continue to be harsher for Blacks and felt more cautious about opening up the state. Tolbert, who has served as a pastor for over thirty years and as the National Baptist Convention of America International, Inc. President, had a strong stance on faith leaders’ role in protecting their congregation.

“[We] need to recognize that our people are the ones that are going to get sick and die at a higher percentage,” he said. “You cannot bring that group back the same way you are going to bring everybody else back. There must be a delicate balance between the profits economically and the profits of people’s health.”

Based on the data in the two months since the tele-townhall events, Black Louisianans are still being hit harder by COVID-19. According to the Associated Press, Louisiana’s confirmed COVID-19 cases are among the fastest growing per capita in the nation. As of July 15, the 7-day rolling average for confirmed cases was 1,969; a 78.8% increase compared to the 42.9% for the US. At 52.4%, African Americans still represent a disproportionate number of deaths.

Two Louisiana parishes have the unenviable position of ranking in the top 20 counties for the highest infection and death rates. With 6,748 per 100,000, East Carroll Parish ranks eighth among infections—and 70 percent of the parish’s population is Black. St John the Baptist Parish ranks twentieth for death rates at 200 per 100,000—and 55 percent of its residents are Black.

“People from all colors or all ethnicities love the word equality, because it feels good,” said Muhammed, who moved from the Bay Area a year ago to lead her agency. “I have a shot and you have a shot and that feels good, but most people don’t understand what equity means.”

Recognizing that authentic dialogue and policy shifts could change this ingrained system that perpetuates shorter lives for black people, LPHI has continued to hold these complicated conversations through webinars, such as Now Is the Time: An Open Conversation with Local Leaders about Race and Public Health. 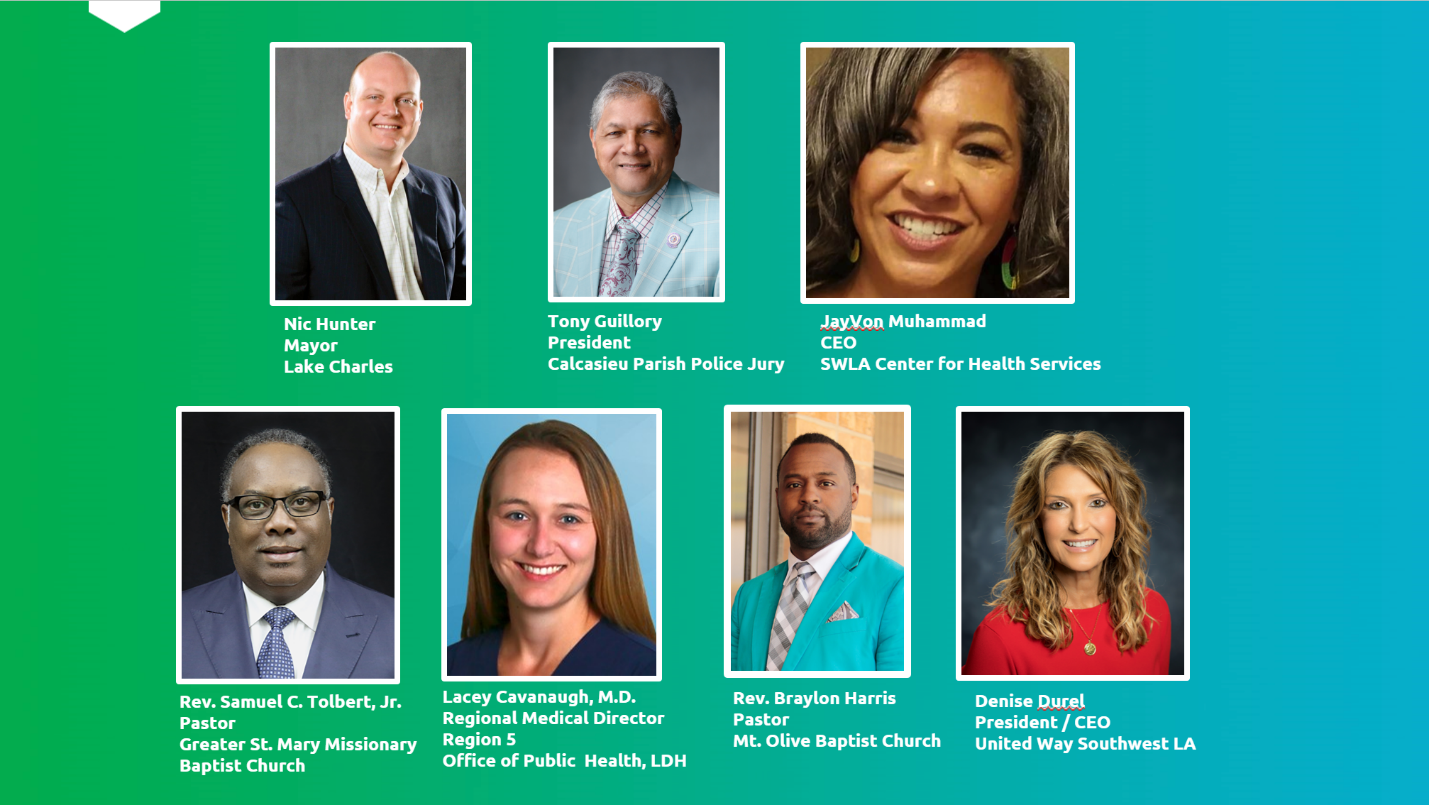